The PSF is always thrilled to be able to help introduce young people to the world of programming. As such, Young Coders' Workshops (also see O'Reilly) are especially close to our hearts. Young Coders, for those of you who don’t know, was started in 2013 at PyCon in Santa Clara by Katie Cunningham and Barbara Shaurette (see My Dinner with Katie). Kids ages 12-17 learn to code using Raspberry Pis, which they then get to keep.
Recently, the PSF has granted funding for PyOhio and for its Young Coders' Workshop. The conference will be held August 1st - 2nd on the campus of Ohio State University in Columbus, Oh, while the YC workshop will take place on Sat August 1 (see PyOhio).

PyOhio serves as a regional conference for the Midwest with many attendees from surrounding states. Attendance at PyOhio has grown from 150 in 2010 to 400 in 2014. There will be 4 tracks of talks over 2 days and three days of sprints. This year’s schedule include a keynote by Catherine Devlin and talks by Brandon Rhodes and Brian Curtin among others. Registration is free (see PyOhio)!
Brian Costlow, Chair of PyOhio, explains that the Young Coders Workshop targets kids who wouldn’t otherwise get the opportunity. PyOhio organizers reach out to partners to get the word out to those beyond tech circles. They reserve 40% of workshop slots for their partner organizations' for kids from disadvantaged neighborhoods. Last year in 2014, the kids came from one of the most economically distressed neighborhoods in Columbus (see Demographic Info).
This year, the Boys & Girls Clubs of Columbus, OH is helping to recruit kids from poorer neighborhoods.
According to Brian,

The PSF is happy to be able to help with funding for such a worthwhile event. Not only do the kids get to keep the Raspberry Pis, but they also go home with the keyboard, mouse, and cable. This is especially important for underprivileged kids who may not have access to computers outside of school.
Other sponsors of PyOhio and Young Coders include Level 12, Safari, and Caktus Group, to name a few (see Sponsors). But sponsors are still needed, so there is still an opportunity to help! Please visit Sponsor Prospectus.
I would love to hear from readers. Please send feedback, comments, or blog ideas to me at msushi@gnosis.cx.
Posted by Unknown at 7/13/2015 08:26:00 PM

I said that it can be run off of another device or from its own battery power. However, the latest and final version has eliminated the internal watch battery slot that was featured on the earlier prototype in favor of offering an external battery pack that can be attached. This was done as a safety feature, especially given the possibility of 7th year school children having  younger siblings at home (BBC News).

My sincere apologies for any inconvenience my mistake may have caused.

July 7, 2015 BBC Microbit
Last March, I wrote about a terrific educational project taking place in the UK, with which the PSF is proud to be involved (see PSF Blogpost). I am very happy to report today that the BBC micro:bit project has successfully launched!
The BBC micro:bit release is part of the BBC’s Make it Digital initiative, whose purpose is to prepare a generation for the challenges of a tech-driven world. The project is a collaboration of 29 partners from industry, education, and government.

At the beginning of the school term this September, every year-7 UK student (11-12 years old) will be given a BBC micro:bit computer. Designed to inspire creativity, the BBC micro:bit is pocket-sized, versatile, and, most importantly, easy to use: 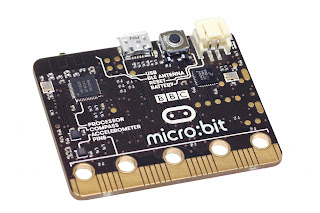 Something simple can be coded in seconds – like lighting up its LEDs or displaying a pattern – with no prior knowledge of computing. All that’s needed is imagination and creativity.

The idea, according to Sinead Rocks, head of BBC Learning, is to make using computers creatively as natural to children as using crayons to experiment with coloring.
The micro:bit can be programmed via web-based editors capable of using several programming languages, including Python, Javascript, C++, Microsoft Touch Develop, and Blocks (a visual language). The user can then save her program, run it in a simulator, and retrieve it any time to load it onto the BBC micro:bit.
In addition to internet connectivity, the device can also connect, via five I/O rings as well as Bluetooth, to other computers and devices, including Raspberry Pis, Arduinos, Kanos, robots, and motors. When connected, it can be powered off another device, or it can run on its own battery. The micro:bit also features a compass and an accelerometer.
BBC Learning, along with the project’s partners, are providing educational resources and tutorials aligned with school curriculum, in an effort to ensure that teachers are ready when the micro:bits are distributed to students. With open-sourced specs and plans for a non-profit to oversee further educational use of the device, the micro:bit’s initial reach is sure to grow. Commercial development of the device is anticipated by the end of 2015.
The PSF is eager to seize this opportunity to further the use of Python and to increase programming literacy. According to the BBC,

I urge Python developers to volunteer for this effort and to get involved in this wonderful educational initiative. You can read more about this project at: BBC micro:bit and BBC Learning.
I would love to hear from readers. Please send feedback, comments, or blog ideas to me at msushi@gnosis.cx.
Posted by Unknown at 7/07/2015 05:47:00 PM

The PSF is happy to report that the third annual PyCon Singapore took place June 17 to 19, 2015. This event, organized by the Python User Group Singapore, is a testament to the robust presence of the Python community in the Asia-Pacific region. In addition to three PyCons Singapore, PUGS has held three PyCons Asia-Pacific. Congratulations to Ivan Zimine and the organizing committee for a successful conference. According to Ivan, “Feedback from the participants was mostly positive. Out of 18 responses, 7 people gave 4 out of 5 stars, and 6 people gave 5 out of 5 stars for the “How did you like PyConSG?” question." 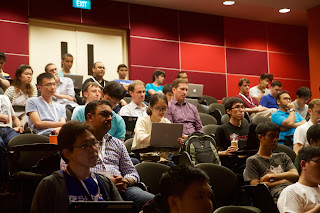 Photo Credit Martin Brochhaus
CC 2.0
The PSF contributed to the event as a Silver Level Sponsor, and we were proud that keynote speakers included our own PSF Director Lynn Root and former PSF Director Jessica McKellar. Django core developer Andrew Godwin also gave a keynote.
The event was attended by 181 people and was held on the campus of Singapore Polytechnic. It consisted of one day of tutorials and two days of talks. Tutorials covered topics such topics as unit testing, data stores, and beginning programming with Python and Django, and were attended by 96 people, of whom 64 were students. Lynn Root’s tutorial, “How to Spy with Python,” explained how the NSA and the UK’s Tempora programs can collect data on citizens' search histories, emails, IRC conversations, PGP usage, etc. As Lynn was clear to point out, however, the talk was not an endorsement of spying or a how-to, but rather a “… way of understanding the current political environment, as well as indirectly understanding how to protect one’s privacy” (see How to Spy).
127 people (of whom 41 were students) attended the two days of conference talks. Featured speakers included Anand Chitipothu, Kristin Nguyen, Ricky Setyawan, Sacha Goedegebure, Colm O'Connor, and others covering a wide range of topics, including interpreters, data processing, educational games, data processing, machine learning, multicore processing, and film production.
A first-time feature of the conference was its edu-summit, which was attended by approximately 40 Computer Science teachers.
The summit included a talk by Praveen Patil titled Python in my Physics classroomabout how to incorporate computer science into the science curriculum using ExpEYES, an Open Source Pocket Science Lab (https://pycon.sg/schedule/presentation/59/).
Here are some links and pictures of the event: PyCon Singapore, Blog Post, Group Photo, Welcome.
I would love to hear from readers. Please send feedback, comments, or blog ideas to me at msushi@gnosis.cx.