This September, twenty-nine core committers arrived at Microsoft’s main campus in Redmond, Washington, USA for the now-annual core developer sprints. These are an opportunity for the core team to have focused discussions, in-depth conversations and work free from interruption for five days. By the end of the week, thirty-one core developers went home tired but satisfied. 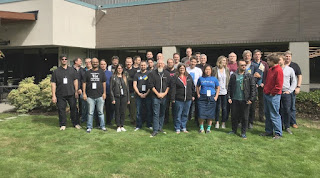 The major sponsor of the sprints this year was the Python Software Foundation. Microsoft provided the venue and some events during the week, and Facebook, Microsoft, Google, LinkedIn, Bloomberg, and a number of small companies covered their employees’ expenses.

With over thirty people working for a week, there were many achievements and improvements made for Python 3.8 and earlier versions. Some of the highlights include:

With our BDFL of Python retiring earlier this year, we spent some time discussing how to approach the future of Python. More than any specific outcomes, the discussions were very fruitful and helped many of us see how similar our positions are to each other.

While no decisions have been made, all current proposals intend to keep the PEP process, and limit the new leaders’ responsibilities to arbitrating controversial decisions.

Final proposals are due by the end of September. See PEP 8000 for an overview of the process and links to related PEPs.

Those who read the first paragraph carefully will have noticed that more committers left the sprints than arrived. This happened because we appointed two new core developers during the week. Congratulations to Emily Morehouse and Lisa Roach! 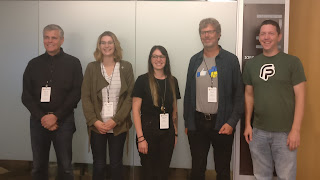 
Emily is the Director of Engineering at Cuttlesoft. She has previously attended two Language Summits and three core development sprints at PyCon. Since July, Emily has worked with Guido's guidance to implement PEP 572, Assignment Expressions.  She has also worked with Eric Snow to dive into CPython's runtime as well as subinterpreters.  This year at PyCon she gave a talk on Python's AST.
Lisa has a background in network engineering and supported the Cisco sale engineer team to develop high quality Python product demonstrations.  Later she moved to the Facebook security team.  This is her third core developer sprint.  She and Guido are co-authors of PEP 526, Syntax for Variable Annotations. Last year, she worked with Eric Smith on PEP 557, Data Classes.

Other attendees have posted their own blogs describing their experiences at the sprints. (This list may be updated over time as more are published.)

A huge thanks to all the participants who attended, the various companies who sponsored parts of the event, and the PSF for covering the majority of travel expenses. Thanks also to those contributors who were unable to make it this year. Hopefully next year we can include even more core contributors.