The PSF has been happy to acknowledge and help sponsor the use of Python in creating terrific Web Development Frameworks. This blog has previously featured several instances of PSF involvement in Django-related events (see e.g., CSA Award to Django Girls).
There have also been major developments in the world of Plone. For those of you who don’t know, Plone is an open source Content Management System, written primarily in Python. It was developed in 1999 by Alexander Limi, Alan Runyan, and Vidar Andersen, atop the open source Python-based Zope application server. Its license is held by the non-profit Plone Foundation.
According to Wikipedia,

Plone is positioned as an Enterprise CMS and is most commonly used for intranets and as part of the web presence of large organizations. High-profile public sector users include the U.S. Federal Bureau of Investigation, Brazilian Government, United Nations, City of Bern (Switzerland), New South Wales Government (Australia), and European Environment Agency.

Plone’s website highlights its size and scope ("340 core developers and more than 300 solution providers in 57 countries… "), versatility ("available for all major operating systems… and in more than 40 languages"), and security track record ("the best … of any major CMS"). See Plone website.
This year, the 13th annual Plone conference will be held in Bucharest, Romania, October 12 - 18. It will mark Romania’s first major Python event, and the PSF is proud to be a sponsor at the Silver Level, with a grant of $2000 USD. Check it out at Plone Bucharest. 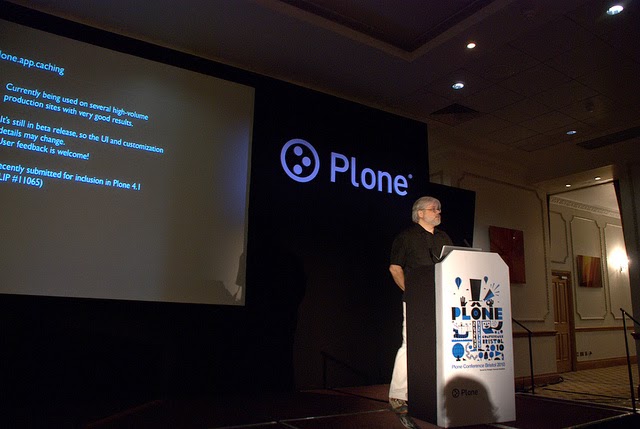 The conference website also calls attention to Bucharest’s eclectic burst of metropolitan and intellectual ambition, and its many attractions, ecstatic night-life, and immersive underground culture.
In addition to its successful conferences (last year’s conference, held in Bristol, UK, featured 42 talks in 3 rooms over 2 days), the Plone community is well-known as a pioneer in the use of sprints for open source development. October’s conference will hold Plone’s largest annual sprint at the conference site, immediately following the 2 days of scheduled talks.

Plone Bucharest certainly sounds like an exciting place to be in October!