Last month PyCon Japan took place from October 9 - 12th at the Tokyo International Exchange Center Plaza Heisei. The PSF has recently received a report from the Chair, Takanori Suzuki, and it appears that the conference was a great success.
As a bit of background, the first PyCon Japan was held in 2011. The conference was a one-day affair with talks comprising three tracks. 247 people attended. Each year since then, PyCon Japan has grown in size and complexity. Last month’s sold-out conference had 602 attendees, with 80 people attending tutorials, and more than 50 staying for a fourth day to participate in Sprints.
There were 43 sponsors. Sponsoring at the Diamond level was the Japanese firm MonotaRo. Other sponsors included PayPal, O'Reilly, CodeIQ, JetBrains, Nikkei, and the Japanese online marketplace, Curama. The PSF was happy to contribute as a Gold level sponsor.
There were 32 talks–11 given in English and 21 in Japanese–covering a variety of topics, including Pandas, Data Analysis, Metrics, Grep, Asyncio, Translating code into non-English, Erlang, and more. 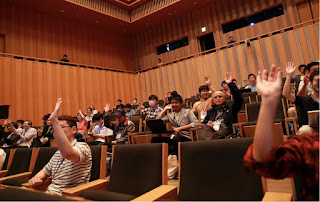 There were two keynotes–one in English by PSF Fellow, Hynek Schlawack, entitled Beyond Grep: Pragmatic Logging and Metrics; and one in Japanese by Haruo Sato, entitled Possibilities of Python, which was also the theme of the conference.
There was also a panel discussion on Diversity and the Future of the Community. Due to outreach efforts, the Japanese Python community has become more diverse – more women are participating in programming, as was clear from the groups represented on the panel: Moderator, Makabi Love, of PyLadies Tokyo, was joined by representatives from RailsGirls, Java Women, Django Girls, and Women Who Code in a discussion about how to increase diversity.Rounding out the conference were a poster session, jobs fair, lightning talks, and a children’s workshop. An additional feature of the conference was an official chat session, set up in both English and Japanese for participants to communicate with each other.
Slides and videos from conference talks can be viewed here,  and at The Possibilities of Python.  For more photos, see PyCon JP Photo Album.
I would love to hear from readers. Please send feedback, comments, or blog ideas to me at msushi@gnosis.cx.
Posted by Unknown at 11/12/2015 11:32:00 PM