From October 19th to 23rd, 47 participants gathered for the first-ever virtual 2020 Python Core Developer Sprint. This included 41 Python core developers, 3 triagers, and 3 core dev mentees. The core dev sprint is an annual week-long meeting in which the CPython core team has the opportunity to work directly together on projects and get to know one another better, free from outside distractions. Many of the core developers participating in the event received the week off from their employer to focus on the sprint.

Due to the challenges of the COVID-19 pandemic, the event had to be done remotely. This was unlike previous years, where it was hosted in-person by a sponsoring organization. While it was not exactly the same experience, it came with the silver lining of allowing participants to join the sprint from anywhere in the entire world, including those that would have otherwise been unable to travel to a physical event. Participants joined in from Canada, USA, England, Poland, Israel, China, Germany, South Korea, Japan, and the Netherlands.

Google stepped up to host the in-person event in 2020. Since that didn't work out, they were able to sponsor the virtual event so participants could receive a meal stipend for the entire week. We hope the availability of that stipend made it a more enjoyable event for participants. 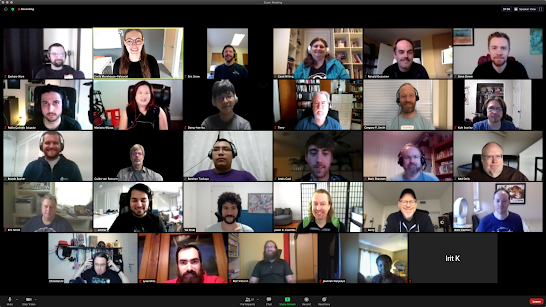 The virtual event itself was hosted on Python Discord, one of the largest and most active dedicated Python communities with over 100k members. Hosting the event on an existing Discord server allowed us to significantly simplify the setup process, obtain invaluable help from the Python Discord admin team, and create a greater audience pool for the community Q&A. The platform choice was reached democratically through a poll in the “Committers” section of discuss.python.org.

Leading up to the sprint, we created a readthedocs site as a centralized location for documentation on the sprint, links to shared docs, google calendar, project participants, Discord setup, and more. There was also a dedicated “Tech Check” day, where we set aside a full day to answer participant questions about the sprint and help them with any platform setup. Other components involved in organization of the sprint were tracked via the python/core-sprint repo.

By the end of the sprint, we merged a total of 215 pull requests within the core Python repositories, including CPython, devguide, peps, etc. On Discord, sprint participants posted more than 5,800 messages across various channels.

The Ask a Core Dev Anything session was hosted by the Python Discord admin team and live-streamed to YouTube. It had 2,100 unique live viewers, and peaked at 385 concurrent viewers. By the end of the sprint, the session had 3,339 total viewers, with 37 countries tuned in. After the session, a number of core developers continued engaging with Python community members on Discord in the #stream-afterparty channel.

Each individual project effectively had their own sub-group, and organized internal meetings via a shared Google Calendar. Some of these projects included stdlib modules such as asyncio, importlib, pegen, ast; as well as other areas like C-API/subinterpreters, PR review, pattern matching, PEP 594 and improving new contributor experience. Here were some of the highlights for each project:

For a more comphrehensive summary, see the Send-off Meeting.

In order to improve future sprints (especially any with a virtual component), we also asked participants at the end of the event to fill out a survey to provide feedback on parts of the sprint for parts they enjoyed and areas of improvement.

A huge thanks to: