Ronny Pfannschmidt spoke about annotated assertions. He is a pytest maintainer and loves approachable debugging.

He compared assertions in unittest with assertions in pytest. He remarked that mistakes have been made in the past and are still being made today. Before pytest 2.1, pytest would reinterpret assertions, which was bad for side effects. Today, pytest deals with side effects by handling all of the variables, collecting them, and showing them to you.

Here's what he would like to see in Python: 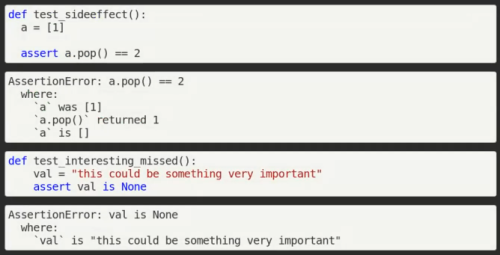 Pablo Galindo and Batuhan Taskaya shared their thoughts on what they want to do and what they don't want to do with PEP 657. The goal of this PEP is to improve the debugging experience by making the information in tracebacks more specific. It would also help with code coverage tools because it would allow expression-level coverage rather than just line-level coverage. JEP 358 has already accomplished something similar.

The speakers want to:

They want to avoid:

For the opt-out mechanism, there will be two ways to deactivate the feature:

Who Speaks for Mort on python-dev?

Luciano Ramalho explained that Mort, Elvis, and Einstein are names for personas that have been used within Microsoft to understand the needs of users:

Users of Python can be organized into similar groups with distinct needs. Since Einsteins may not clearly understand the needs of Morts and Elvises, Luciano Ramalho suggested that it may be time to recruit core users to speak for the Python users who aren't also core developers.

Jason R. Coombs shared his thoughts on designating transformation functions to be applied to parameters and return values. He had originally been inspired by the simplicity and power of decorators, and his idea could in theory be applied with decorators today. However, he determined that it would be more elegant to use annotations.

Using this approach would have advantages:

However, there would also be challenges:

The higher a tier, the hotter the code that it will execute. Today, CPython is at tier 0.3. It's a compromise between memory use and speed but isn't optimized for either. He said that tier 0 could be considered for Python 3.11 or later. It could:

Tier 1 is planned for Python 3.11:
Tiers 2 and 3 are entirely hypothetical at the moment and would involve JIT compilers. They maybe be more like LuaJIT than JVM.
Switching between tiers can be expensive, but the goal is to make it cheaper by having the same in-memory data layout for all tiers. In order to support all of Python, we will need to switch between tiers often. Each tier should be maintained mostly independently for open-source development. The performance cost won't be high if the memory layout is designed carefully.

Tobias Kohn has been working on TPython, a new Python implementation that works in the browser. His objectives were to do multiprocessing in the browser, not block the UI, and use native JavaScript libraries.

You could suspend the current task and let everything in the event queue happen so that the message can be processed and then resume your task later on. To do that, you could use the bytecode in Python 3.6+ because the frame already has an index into the bytecode and captures state, to a certain extent. However, some bytecode instructions are too complex. _add_ can execute arbitrary Python code, fail, call _radd_, and execute other Python code. The standard bytecode is insufficient.

He's currently using an MPI interface for parallel processing. There is: